Sri Lanka today celebrates the 70th anniversary of gaining independence from the British colonial rule in 1948 in a grand ceremony at the Gall Face Green in Colombo, under the patronage of President Maithripala Sirisena and the participation of Prime Minister Ranil Wickremesinghe.

Representing the Britain’s Queen, Prince Edward, Earl of Wessex, and The Countess of Wessex, participated in the Independence celebrations today as Chief Guests.

The theme of today’s Independence Day ceremony is “One Nation”. 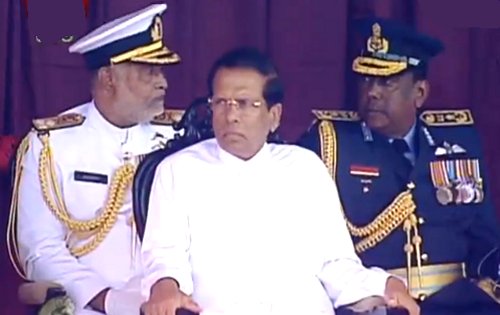 President Sirisena opened the Independence Day celebrations with hoisting the National Flag this morning and a two-minute silence was observed before the ceremony commenced to commemorate the patriots who had sacrificed their lives for the independence, sovereignty and territorial integrity of Sri Lanka.

The Independence Parade following the President’s address was adorned with parades by the tri forces and cultural shows by students and civil organizations.

A large number of foreign diplomats, ministers, members of parliament, and senior government officials participated in the celebrations today.

Meanwhile, a cultural show and a concert themed “night of Freedom” will be held under the patronage of the President and the Prime Minister at the Town Hall grounds in Colombo. The Earl of Wessex and The Countess of Wessex are also scheduled to participate in the event.

The National Youth Services Council, Sri Lanka Police, Navy, Army, Air Force and the Civil Defense Force are to make presentations at this musical show which starts at 8.30 pm in the premises of the Colombo Municipal Council.

Relief for non-payment of monthly electricity bills in curfew areas

Independent.lk is the on-line portal of the Ceylon Independent newspaper.

The Ceylon Independent was the first printed weekend newspaper to be distributed free of charge. It remains free for all our readers. The website is also a free access service.

You may have missed

Is Covid here to stay?